The global economy entered the second quarter in good shape with growth broadening through March. Uncertainties still remain particularly in relation to the US Trump Administration?s ability to implement its planned fiscal spending and tax cuts. Regardless, US economic growth is gathering pace. Rising wage pressures look set to push underlying inflation higher giving the US Federal Reserve more scope to continue its normalisation of interest rates and move towards reducing its? oversized balance sheet. The recovery in emerging economies is broadening out, assisted by higher commodity prices. China is however expected to fade as policy makers focus on credit risk and tighten monetary policy settings. Meanwhile in Australia the economy continues to walk a fine line between too much stimulus overheating the property market and not enough stimulus to improve employment conditions.

Prospects for the global economy continue to brighten in line with our comments from last month. Industrial production growth picked up during the quarter and with Purchasing Managers Index (PMI) remaining entrenched in the expansionary zone and the highest for 5 years. The expansion has been broad-based although PMI?s slipped back in Japan, UK and the US. Consumer indicators are positive and consumer confidence has now hit a ten year high. This is perhaps reflected by unemployment levels that are now back to pre GFC levels. Inflation may be close to peaking outside the US and UK where economic growth is stronger. 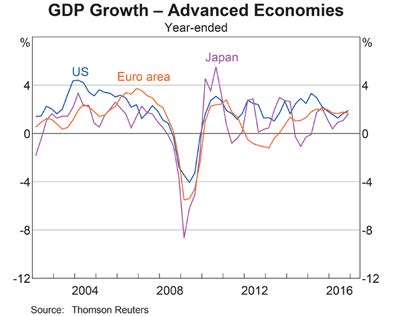 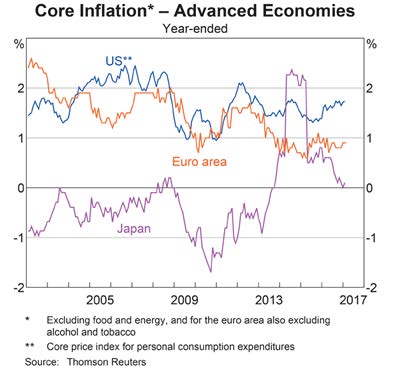 The US economy is now operating close to capacity and that is causing inflation to lift modestly. Employers have noted that it is increasing difficult to find qualified staff and are now offering higher wages to attract the right people. In Feb, headline CPI lifted to 2.7%, while core inflation was 2.2% (excluding food and energy). Both are above the Fed?s 2% target showing true to their word that they will let the economy run a little hot for a while. The Fed increased the its funds rate by 25bpts as we expected during March to 1.00% and indicated more increases are likely in the foreseeable future. The US Fed will be watching the data closely; Consumer confidence indicators pointing to a surge in consumer spending, wage growth is showing signs of picking up while growth in aggregate lending to households and firms has slowed but remains strong. Continued strength in these areas lead us to believe the Fed will raise rates in June and December at the very least. 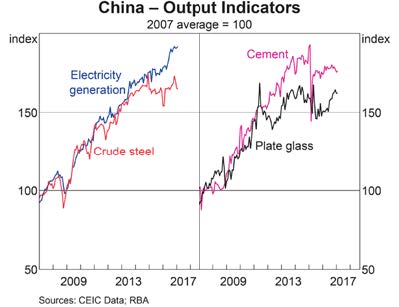 The Chinese National People?s Congress announced a growth target of 6.5% or stronger for the 2017 which is slightly lower than the pace of growth recorded for 2016. Policy makers continue to deal with a number of issues that face the economy; winding out inefficient State Owned Enterprises (SoE?s), reducing monetary stimulus reflecting concerns about financial stability and, excessive residential construction and house price inflation. It appears to be working as the Capital Economics China Activity Proxy suggests that the recent improvement in growth seen over the past year has fizzled out.

This is consistent with our view that the recent rally in bulk commodity prices over the last 12 months has been driven by supply constraints and other stimulus in China. We believe that these drivers of the 2016 rally are unsustainable and that the credit-fuelled investment led economic cycle that pulled forward steel demand has only delayed the inevitable structural decline. As such we see downside to steel making components iron ore and metallurgical coal. China?s transition to a more consumer driven economy will be more notable which drives us to be more positive on lithium and uranium. Demand for lithium ion batteries, that power the world?s ?technology in your pocket? and more and more vehicles, will see ever increasing demand, while uranium appears to have bottomed as governments and their constituents begin to forget the Fukushima incident.

The euro area and Japanese economies have grown faster than their potential growth rates over 2016, resulting in further improvements in labour market conditions. GDP growth in Europe is showing signs of lifting and inflation accelerated largely as a result of higher oil prices. The European Central Bank has begun tapering its quantative easing program. The Dutch election resulted in a pro-EU government denting the populist forces that fuelled Brexit and the election of Trump. Political risk in Europe has resided but remains in focus. Britain is about to start 2 years of divorce negotiations with the EU and elections in France and Germany in May. Greek Government debt negotiations are also looming once again.

Australian economic growth rebounded sharply in Q4 2016, up by 1.1% q-o-q and 2.4% y-o-y. Nominal economic growth was even stronger, aided by a boost to national income from much higher commodity prices. The jump in economic growth was partly due to the reversal of statistical anomalies that caused Q3 GDP to be so weak. Latest data on the housing market confirmed that it is still firing. Annual house price growth rose from 11.7% to 12.9% according to CoreLogic and building approvals in February surged. However, approvals are still more than 10% below their peak in august 2016 so dwelling investment won?t support GDP growth as much in the next Qtr.

Consumer and business sentiment readings have firm, other indexes have been mixed. Retail trade rose in January after falling in December and Employment fell unexpectedly in February. Of continued concern is the boom in housing and associated debt (debt is rising faster than wages). The RBA is on a policy knife edge with inflation pressures remaining low due to record low wages growth. Inflation outlook provides no reason the RBA to raise rates, however, households are continuing to lift borrowings off an already high base and a too fast a pace, particularly into the residential housing market. APRA has announced more prudential controls aimed at slowing the housing market and providing the RBA more policy wriggle room. If these controls show little sign of working the RBA may be forced to raise rates to preserve financial stability over economic growth. The preference would be for the RBA to cut rates to help lower the AUD$ and boost employment.

Overall the household and housing sectors appear to have provided a more modest contribution to GDP growth in the first quarter. The Australian economy almost certainly didn?t start the year on as strong a footing as it finished 2016. The RBA will remain in a policy trap for much of 2017 and hold rates at 1.5% unless the Federal Government steps in with other much needed fiscal policy stimulus that has been lacking for too long now. The US will remain strong despite uncertainty over the Trump Administration?s ability to implement its policy agenda and will underpin global economic growth. Europe is continuing to improve but political risks remain. Markets will be buoyed by pro- EU elections in France and Germany. Commodity prices may continue to soften in line with fiscal and monetary policy setting changes by the Chinese National People?s Congress.

Royston Capital is a privately owned and operated business. (AFSL: 438262 ABN: 98 158 028 392)
This information is of a general nature only and has been provided without taking account of your objectives, financial situation or needs. Because of this, you shouldconsiderwhethertheinformationisappropriateinlightofyourparticularobjectives,financialsituationandneeds. Norepresentationisgiven, warranty made or responsibility taken about the accuracy, timeliness or completeness of information sourced from third parties. Because of this, we recommend you consider, with or without the assistance of a financial adviser, whether the information is appropriate in light of your particular needs and circumstances.
Sources: Alexander Funds Management, Admiral Investments, Morningstar, Reserve Bank of Australia, Capital Economics.
Past performance is not a reliable indicator of future performance. Projected earnings are not guaranteed.