November 2016 is likely to be remembered not for the economics but for the surprise victory of Donald Trump in the US Presidential election race. Financial markets moved quickly and focused in on the growth-positive initiatives of Trump?s policy pledges ? lower taxes and more government spending. This added to a shift already underway, re- pricing of bond yields higher. Economic releases during the month indicated firmer global economic growth on balance with the clearest signs of accelerating economic growth coming from the US. In Australia however, the economy is continuing its transition from the mining investment boom with some slowing in growth in Q4 before it picks up again.

Bonds have been the main focus of recent months and more so on the election of Trump. The charts below show the US 10yr bond yield (yield is inverse to price) over monthly (left) and daily (right) time frames. US government bond yields have risen but only to levels similar to that of 12 months ago. Funding costs for some borrowers have risen but remain low. Globally, monetary policy remains exceptionally accommodative. 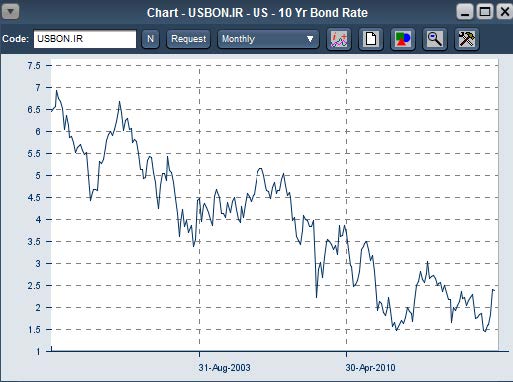 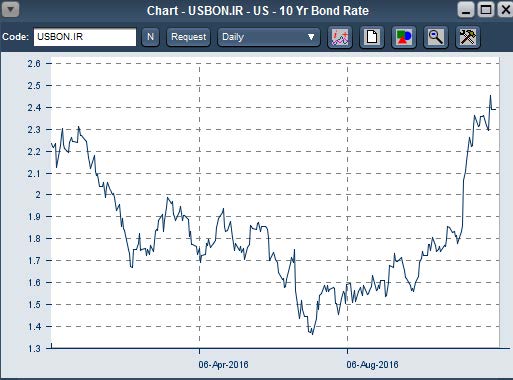 Signs of stronger economic growth, especially in the US, continued to catch-out government bond markets priced for slow growth and persistently low inflation. The election of Trump signalled a shift in US policy to debt-funded fiscal expansion, this added momentum to the upward pressure on bond yields. Fiscal spending is something readers will know we have been calling for some years now. The election of Trump while a surprise given some of his campaign comments was never discounted by Royston Capital. Along with the vote for Brexit, it has been clear that there is swing in voter sentiment against the ?establishment? which has focused on post-war globalization to the benefit of the rich. This is the western equivalent to the ?Arab spring?. More recently we have also seen Italian Prime Minster, Matteo Renzi, step down after a failed attempt to reform the senate…….only to delay stepping down after the President asked he stay on to see the budget passed….. this could be a soap opera. Looking forward we have general elections for Germany, France and the Netherlands in 2017. We are watching for a more protectionist political stance.

Following the ‘no’ vote in the Italian referendum on constitutional change, we have seen, almost counterintuitively, the Italian and indeed European markets rally. The scale of the no vote (and the level of turnout) is being seen as increasing the pressure on the ECB and Germany to allow a public bailout of the embattled Italian banking sector. Even with this, the rise of populism and the tail risk of an EU breakup have increased. On November 8th the European Central Bank (ECB) meets. We would expect the ECB to extend and possibly expand the bond buying programme.

Contrary to the expectation of further slowdown in economic growth earlier this year, China seems to manage to maintain its real GDP growth target of 6.5% – 7.0%, with 6.7% real GDP for the past 3 quarters. We continue to see evidence of stabilizing economic growth as discussed last month. Although, the balance of the growth drivers in the economy is not quite what the authorities would like to see (strong demand for property offset by weakness in the export sectors). While China is likely to meet most of its 2016 targets, its 2017 outlook has become more challenging. The manufacturing sector remains under pressure due to excess capacity and weak global environment. Admiral Investments internal analysis estimated that capital outflows from China would continue in 2016, although the rate at which capital flew out has slowed compared to 2015. Nonetheless, China?s foreign reserves remain one of the largest in the world, and as such, we do not believe that capital outflows in and of itself will trigger economic concerns. However the trend suggests that for many investors and corporate management, China presents less desirable investment opportunities when compared to other markets in Asia and the rest of the world. We also see the potential for increased tensions between a Trump led US and China being negative for both countries.

In Australian, poor print on GDP in early December, but investment markets up as this is seen as a reduced chance of interest rate rise from the RBA. But banks have partly been doing this for the RBA in recent weeks, with major banks lifting lending rates to account for higher borrowing costs. The RBA kept rates on hold in November and also in December. Economic readings are patchy but the RBA appears to be becoming more convinced that growth will improve overtime. This is in part assisted by diminishing headwinds from falling year-on-year mining investment spending, and commodity prices holding recent gains. The quarterly monetary policy statement implies there is little pressure to change the cash rate. The pronounced sell-off in government bonds over recent months is adversely impacting Australian commercial banks? funding costs and, as mentioned above, they are starting to lift interest rates. This in turn may lead the RBA to cut the official cash rate. Looks like the status quo may remain for the foreseeable future.

A final word on Trump: Trump has indicated that he would invest in America?s infrastructure with both government capital and public-private partnerships. His other polices may lead to capital flight from Asia emerging markets back to the US, more support for exploration for shale, oil, gas and clean coal and increased military spending. All are inflationary in nature. Trump?s policies will pressure US?s trading partners, especially Asia, China, Taiwan and Korea which all have significant export sectors. Trump?s potential moves in trade may further lead to protectionist behaviour at the expense of global trade and globalisation. This regression may lead Asian countries to look inward for growth stimulus which typically benefits large countries like China, India and Indonesia. Ultimately this all hinges on two related questions: Does Trump mean what he said on the campaign trail? If he does, does he have the political support to implement it? Don?t discount a ?yes? answer to both in Royston Capital?s view. The Trump rally is however overdone for now, particularly given lack of real policy detail and erratic behaviour of the president elect. Markets don’t like uncertainty or political interference.

Royston Capital is a privately owned and operated business. (AFSL: 438262 ABN: 98 158 028 392)
This information is of a general nature only and has been provided without taking account of your objectives, financial situation or needs. Because of this, you shouldconsiderwhethertheinformationisappropriateinlightofyourparticularobjectives,financialsituationandneeds. Norepresentationisgiven, warranty made or responsibility taken about the accuracy, timeliness or completeness of information sourced from third parties. Because of this, we recommend you consider, with or without the assistance of a financial adviser, whether the information is appropriate in light of your particular needs and circumstances.
Sources: Alexander Funds Management, Admiral Investments, Morningstar, Reserve Bank of Australia
Past performance is not a reliable indicator of future performance. Projected earnings are not guaranteed.