I had to go all the way back to the December 2016 edition of the Monthly Market Update to find a heading that didn?t read ?Global economy continues to improve….?. This month is no different. Global economic conditions continue to improve with reports from the two largest economies, US and China, indicating their respective economies are running at or above expectations. Other major economies are due to report over the coming weeks are expected to tell a similar story. The robustness of many economies attracting attention of Central Banks which have started to signal either tighter monetary policy (return to normalised rates) or less accommodative monetary conditions via the withdrawal or slowing of asset purchases. There is a reluctance to move too quickly as inflation and wages growth remain below expectations.

?Global balance sheet tapering is also coming. The Fed announced its balance sheet reduction will begin this month. The Bank of England has stopped, and the Bank of Japan has slowed, asset purchases. Meantime, the European Central Bank is expected to end its asset purchasing program in 2018. Overall, advanced economy net asset purchases are likely to fall from $100 billion a month to roughly zero by the end of 2018.

While monetary policy is expected to tighten over the coming year, fiscal policy worldwide is likely to add stimulus. We estimate the recently announced US tax package could cut taxes by US$2 trillion over the next 10-years and boost US GDP by three per cent over the next five years. In Germany, recently re-elected Chancellor Merkel?s coalition is also expected to support growth through tax cuts and public investment (in energy, transport, digital and defence).? 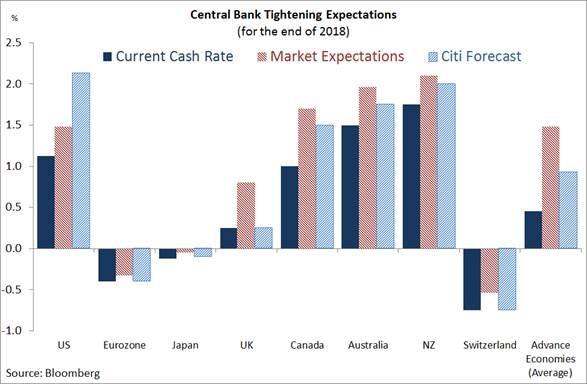 In the US quarterly GDP is running at circa 3% despite the negative impact of severe hurricanes during September. Domestic spending in the US is growing with solid numbers for Consumption expenditure and non-residential investment spending. Leading indicators are pointing to stronger US growth while employment growth has taken a temporary hit in September most likely due to the Hurricanes and wild fires in California. However, with the labour market at a 16 yr low of 4.2% and annual wages growth at 2.9% year on year, we are seeing company earnings continue to grow strongly.

The Trump administration is likely to have to water down is tax reform in order for it be passed by Congress and cold be an area for market disappointment. The Fed Reserve meets this week and it seems that it will be steady as she goes with a chance of a rate hike this year still possible by mid-December. Future policy direction is clouded by the replacement of Janet Yellen as Federal Reserve Chairperson in February.

In China there are signs of increased spending on infrastructure and less emphasis on residential construction and industrial production. President Xi, who has been re-elected for a further 5 yr term, reinforced messages of more emphasis on consumer spending and delivery of services. China is expected to grow comparatively strongly over the coming years which will be a benefit to its trading partners such as Australia.

In Europe consumer confidence is the highest it has been since 2001 and the manufacturing sector is also upbeat. Unemployment remains high but stable and inflation low. The European Central Bank is cautious about the strength of economic growth and pushing ahead very slowly with cuts to its monthly QE bond purchases with an end to the program flagged for September 2018. This implies interest rates will be on hold at least until late 2018.

The outlook for the Australian economy remains patchy. Employment growth has been strong, wages growth weak, and high household debt, with the latter two combining to put pressure on retail spending. An interest rate rise now by the RBA would be disastrous. The AUD$ has appreciated since mid-year reflecting a lower US$. The high AUD$ will restrain price pressures in the economy but will also weigh on the outlook for output and employment in export sectors. The current trend is not expected to persist with rising prices overseas and the AUD$ coming under pressure. This is likely to lead to a lift in inflation. The outlook for infrastructure spending in Australia is strong and is likely to pick up any slack left in employment. Maintaining low interest rates in an improving economy would further encourage increasing indebtedness and present an unacceptable risk to the RBA. Wages growth is likely to follow the increased infrastructure spend and tighter employment conditions during 2018 which will eventually provide the RBA with room to increase interest rates without causing an economic downturn.

Royston Capital is a privately owned and operated business. (AFSL: 438262 ABN: 98 158 028 392)
This information is of a general nature only and has been provided without taking account of your objectives, financial situation or needs. Because of this, you should consider whether the information is appropriate in light of your particular objectives, financial situation and needs. No representation is given, warranty made or responsibility taken about the accuracy, timeliness or completeness of information sourced from third parties. Because of this, we recommend you consider, with or without the assistance of a financial adviser, whether the information is appropriate in light of your particular needs and circumstances.
Sources: Alexander Funds Management, Admiral Investments, Morningstar, Reserve Bank of Australia, https://www.citibank.com.au/aus/insight/wealth- management/global-outlook-stronger-as-reserve-banks-become-shrinking-violets.htm?cid=EM-Investments-NBP-RET102017
Past performance is not a reliable indicator of future performance. Projected earnings are not guaranteed.