As 2017 draws to a close we reflect on a year that has surpassed our expectations, we also gaze into the crystal ball to see what 2018 might bring. 2017 turned out to be a year of economic surprises with global growth broadening and strengthening beyond expectations. The state of play has been; global growth lifting, inflation remaining low, competition becoming more global (putting downward pressure on prices), Australian rates on hold, slow wages growth, managing debt and housing landing (soft or hard?). Central banks either stopped monetary policy easing or started to unwind the accommodative policy stance. The outlook for 2018 at least in first half seems to be more of what we have seen from 2017 although pressures are mounting on inflation and interest rates.

2017 is summarised by this handy chart from PIMCO. 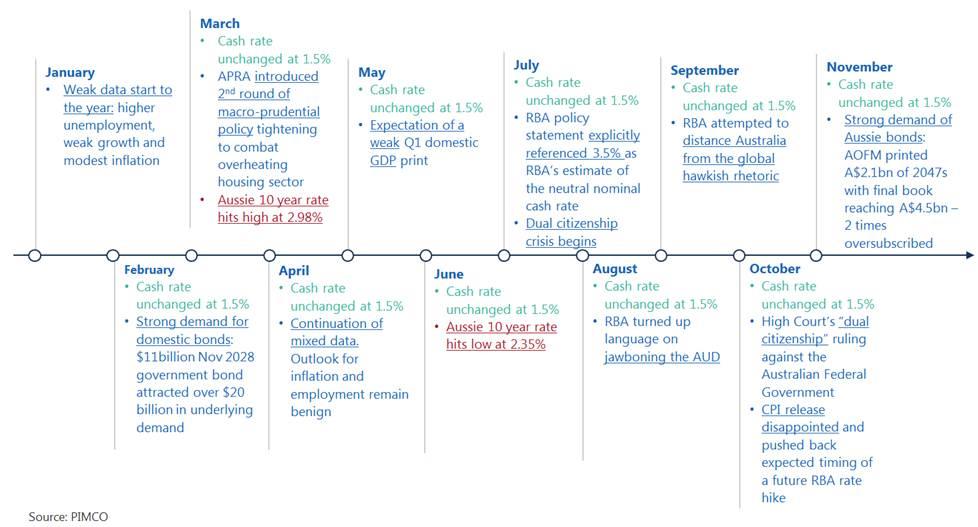 2017 saw forecasters repeatedly lift their estimates of growth as the year progressed. This was in spite of perceived headwinds in the US about economic policy and the competence of President Trump.

The drivers of US growth have broadened to include robust household consumption spending and rising business investment spending. Company profits are rising strongly, employment growth is strong and causing unemployment to fall to a 16 year low 4.1%. Wages are starting to rise ahead of inflation. Most economic indicators of US economic activity are close to record highs. The US economy is being buoyed by strong international demand and the most extensive tax cuts for companies and individuals in 30 years. There is considerable momentum in the US and it will take a powerful circuit breaker to stop the momentum.

As for any economy the most eventual circuit breaker will be tighter monetary policy (higher interest rates). So far the pace of tightening in the US has been very slow because there has been no threat of inflation pushing too high or getting out of control. Note that we see the current rate increases as a return to normal/neutral interest rates and should not be miss-conceived as contractionary monetary policy setting. Wages growth is likely to push higher as spare capacity in the economy disappears, leading to higher inflation and a need to the Fed to act. The change in leadership in February from Janet Yellen to Jeremy Powell may also push back the eventual move to towards more aggressive monetary policy tightening, fuelling stock prices.

China has grown more strongly than expected at the beginning of the year. Policies aimed at restricting speculation in residential real estate and the output of polluting manufacturing industries were expected bite, but instead China has managed to cap the residential property market without a pronounced pull back in fixed asset spending. Fears of a debt crisis also appear to have been overblown. China has benefited from global growth supporting exports, services and retail trade.

While China surprised and finished the year with strong growth real-time measures of industrial action such as electricity generation, freight traffic, and excavator sales have slowed since the start of 2017. Manufacturing Purchases Managers Index (PMI) has also dipped signalling weaker growth prospects among the country?s small to medium sized private enterprises. Monetary conditions have also tightened.

There is no reason to be concerned about the slowdown in China. Growth has weakened but from an above trend pace. A more ominous slowdown can?t be ruled out, but that would require substantial policy error such as the 2015 attempt to reduce credit growth and cool the property market just as the global manufacturing sector was entering a recession.

Much has been said about China?s debt pile but we think any concern for now is overdone. Chinese households are net savers and these savings must either be transformed into domestic investment or exported abroad via a current account surplus. The local property market has been a beneficiary to date. Japan?s experience is proving to be a reliable case study, as long as a country has ample domestic saving and borrows primarily in its own currency, debt can increase to levels many would think impossible.

China?s economic growth may slow in 2018 but not enough to imperil the global economy.

Europe surprised to the upside in 2017. We were concerned about a right wing protectionist shift, after the election of Trump and BREXIT, as elections in Holland, France and Germany loomed large. Italy?s banks were also a concern.
Elections turned out better than expected and Italy?s banking issues have faded. The ECB has maintained accommodative monetary policy and is still planning to maintain its -0.40% deposit rate and continue buying bonds albeit at reducing amounts (quantities easing tapering). The revival of the European economy is intact and should strengthen into 2018 with the support of global growth.

Australia survived 2017 remarkably well. We tried everything possible to derail the economy; increasing household debt, undermining the banking sector, and the government citizenship debacle. Strong global growth came to Australia?s rescue and boosted service exports and held up commodity prices more than expected and helped us secure a record 26 years with our recession. Wages growth remains weak despite employment growth, however infrastructure spending has swung into action. This is the fiscal policy spending that I have begging for over the last few years but has not occurred due to dysfunctional state and federal politics.

Australia is likely to enter 2018 on a reasonably strong footing. While some see rising interest rates as a potential threat to the economy we don?t see any major shift. The RBA is likely to retain its accommodative stance and seek to increase the official cash rate as wages growth takes hold, this will ensure a soft landing in the housing market. Unemployment is at a 41?2 year low and set to fall further as job ads grow. This will help to reverse low consumer confidence to match the record high positive business conditions. 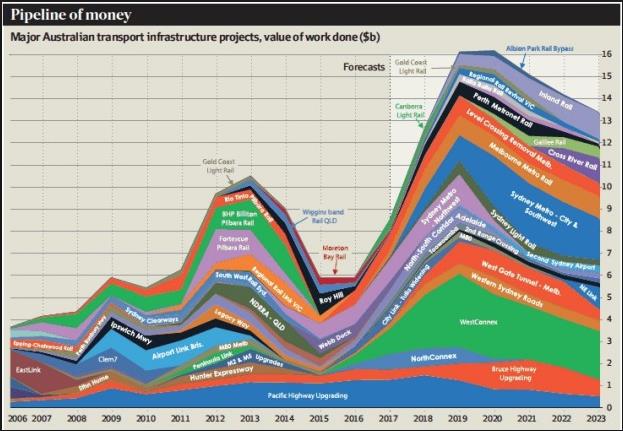 What could go wrong? BCA research have listed their five potential ?Black Swan? events for 2018:

Any of the above could reasonably occur however; impeachment of Trump is unlikely and if it did occur would not have a direct impact on markets, issues with North Korea are overdone but the current regime could topple, politics in the UK is a mess but is unlikely to impact global markets, I can?t remember a time when Italian politics was functional, and Latin America along with other emerging markets will always be at the whim of the US and China?s economic policy setting. In addition to the above we will also be watching; oil prices, the US Fed, home prices, inflation, and the jobs market. All-in-all we see 2018 shaping up well for equity markets but as with any year there are risks and things can and will change.

Royston Capital is a privately owned and operated business. (AFSL: 438262 ABN: 98 158 028 392)
This information is of a general nature only and has been provided without taking account of your objectives, financial situation or needs. Because of this, you shouldconsiderwhethertheinformationisappropriateinlightofyourparticularobjectives,financialsituationandneeds. Norepresentationisgiven, warranty made or responsibility taken about the accuracy, timeliness or completeness of information sourced from third parties. Because of this, we recommend you consider, with or without the assistance of a financial adviser, whether the information is appropriate in light of your particular needs and circumstances.
Sources: Alexander Funds Management, Admiral Investments, CommSec, BCA Research, PIMCO
Past performance is not a reliable indicator of future performance. Projected earnings are not guaranteed.