Global economic growth has continued its broad-based pick-up in June. Labour markets have tightened further in many countries and forecasts for global growth have been revised up since last year. There are hints that US GDP growth will be firmer in quarter 2 than in quarter 1, improvement in Europe, plus signs that growth in Asia is holding up well including China. Against these signs of improving global economic activity, economic growth in Australia continues in spits and spurts and remains fragile. Our outlook remains positive, if not bullish, so long as left-of-field events (escalation of issues with North Korea) do not disrupt the current economic pathway.

Most economies still have considerable spare capacity (high unemployment) and can grow without causing upward pressure on inflation (wage growth remains subdued). A notable exception to this is the US, where unemployment has fallen to a 16 year low, with the US Federal Reserve indicating the economy is operating close to full capacity. US inflation has settled back a little, due to the fall in oil prices and falling costs of mobile phone plans, but the US Federal Reserve expects it to rise later this year and is taking the opportunity to slowly normalise monetary policy. Globally there is no longer an expectation of additional monetary easing. Bond yields will rise and pose a risk to lofty valuations. 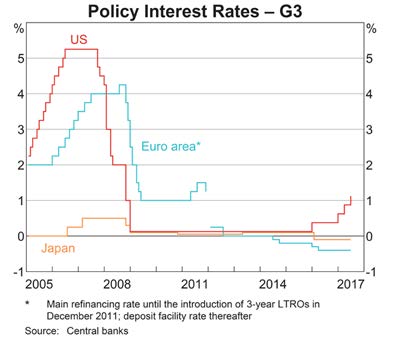 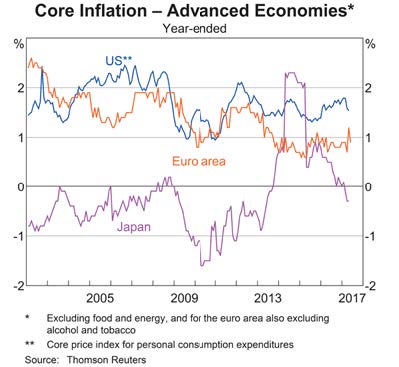 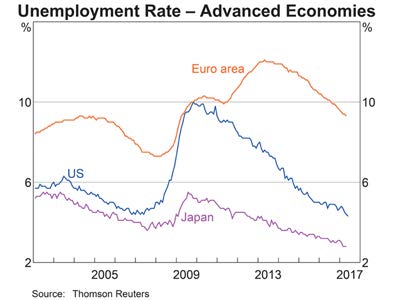 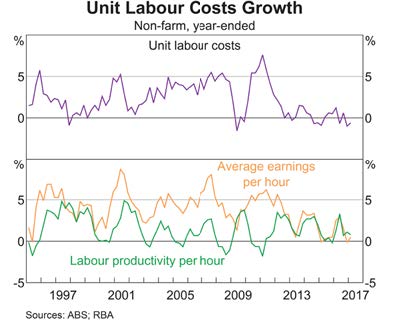 A weaker growth patch in the first quarter we feel is largely explained by an extended and somewhat severe winter. We think that the economy may be on the cusp of a new push stronger. Housing activity, an indicator of economic growth, improved in May with existing home sales, up 1.1% m-o- m, and new home sales, up 2.9%. This was accompanied by a sharp lift in prices, with the median price lifting by 11.5% m-o-m, 16.8% y-o-y. Reginal manufacturing PMIs strengthened further in June.

The outlook for President Trump achieving his promised tax cuts and increased budget spending is no clearer from last month. Regardless, the US economy has substantially recovered and continues to grow. Growth will lead upward pressure on wages and inflation. As such, a forward looking US Federal Reserve is to lift interest rates gradually with the common view that the US Federal Reserve will hike rates again by 0.25% to 1.50% at its December meeting, and to start reducing its balance sheet from September.

In China the government remains confident of achieving its target 6.5% GDP. Export growth surprised in May, as did imports, with the latter a sign of firm domestic spending. China still faces a difficult balancing act in maintaining it stated target of 6.5% annual GDP while rebalancing key growth drivers implementing economic reform. To date, any blemishes have been contained.

Europe continues to come to the fore with further signs of improvement. Most indicators point to growth being sustained and the unemployment rate is at a decade low of 9.3%. Consumer confidence is strong largely due to resolution of Holland and French elections with pro Europe, pro- reform governments being elected. The approaching German election looks increasingly certain that Angela Merkel will be returned as Chancellor. The European Central Bank (ECB) is likely to allow the current growth to continue with plenty of excess capacity limiting the risk of higher inflation, albeit the ECB is starting to lay the groundwork for the unwind of quantative easing.

Earlier in the year the Australian economy slowed quite sharply due to temporary factors which now looks to be behind us now. However, an easing in spending on housing is only just beginning and the efforts of banking authorities to contain excessive lending for investment housing, a rapid cooling of overseas investment interest in Australian housing, falling home building approvals and home building work in progress, all point to a negative drag on economic growth in most quarters over the next year or two. Weaker housing activity typically spills over to less robust growth in household consumption spending too. The issue is what will take up the slack as housing cools? At this stage, there are promising signs for government spending on infrastructure and exports, including exports of a
wide range of services, while the RBA Chairman Philip Lowe reckons we should all ask our employer for a pay rise. There is also reasonable hope that, after a year of very strong Australian company profit growth, business investment spending will no longer be falling.

For the time being, the RBA is still inclined to see positive economic growth factors winning out, although it recognises that there are downside risks too. If the economy slowly picks up pace, at some point wages and inflation will rise and the RBA will lift interest rates. If, however, the negative economic growth forces win out or we see the AUD$ rise, the RBA will lower its growth forecasts and it could cut the cash rate further. At this point the data to hand are far from sufficient to prove the case for either the stronger or weaker economic growth forecasts which implies the RBA holding the cash rate unchanged at 1.50% for several more months to come. Certainly, consensus has shifted, and most economists believe a rate cut is unlikely.

Royston Capital is a privately owned and operated business. (AFSL: 438262 ABN: 98 158 028 392) This information is of a general nature only and has been provided without taking account of your objectives, financial situation or needs. Because of this, you should consider whether the information is appropriate in light of your particular objectives, financial situation and needs. No representation is given, warranty made or responsibility taken about the accuracy, timeliness or completeness of information sourced from third partie s. Because of this, we recommend you consider, with or without the assistance of a financial adviser, whether the information is appropriate in light of your particular needs and circumstances. Sources: Alexander Funds Management, Admiral Investments, Morningstar, Reserve Bank of Australia, CommSec. Past performance is not a reliable indicator of future performance. Projected earnings are not guaranteed.