Conditions in the global economy continue to improve with business and consumer sentiment picking up and most leading economic indicators pointing to stronger growth ahead. Above-trend growth is expected in a number of advanced economies, although uncertainties remain. Headline inflation rates have moved higher in most countries, partly reflecting higher commodity prices, although there are still no signs that the lift in inflation will be maintained. The US however, where the economy has a tighter labour market, is seeing inflation shift upwards and will likely force the Federal Reserve to increase interest rates. Monetary policy easing in other countries is also expected to have come to an end. In Australia, gross domestic product (GDP) looks set to improve and continue its transition following the mining investment boom.

Prospects for the world economy are reasonably bright. Most indicators of economic activity continue to strengthen especially leading indicators of consumer spending, the labour market and manufacturing activity. Wages are rising erratically and inflation continues to lift in the US above the Federal Reserve?s target of 2%. The US should continue to perform well even if Trump fails to implement his planned fiscal stimulus this year such as the planned tax proposals. After several speeches and comments from senior Federal Reserve officials and Chairperson, Janet Yellen, it seems likely that they will lift interest rates by 0.25 to 1.00% in March.

Consensus expectations for China have swung from outright pessimism a year ago to complacency about the downside risks to the economy. The strong growth in recent months has been supported by; fiscal policy support, a property turnaround and loose monetary policy. All of these supports are being removed as policy makers shift focus to structural reform to rebalance the economy to a more sustainable path. This is evident in the chart ?Fixed Asset Investment by SoE?s has Surged?. Further moves have been made to close the most inefficient state owned enterprises (SoE?s), notably in steel production. China has also tweaked official lending interest rates by 0.10% during February in an attempt to manage capital outflow and limit too fast growth in residential construction. 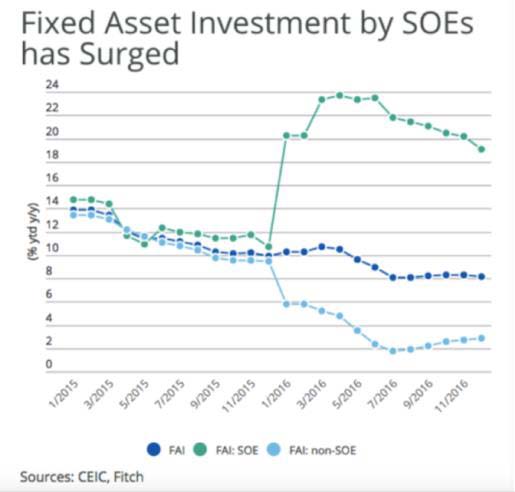 European GDP growth and inflation are showing signs of lifting and?remain well supported by European Central Bank (ECB). The ECB is however starting to reduce its monthly asset purchases (Quantative Easing). Euro-zone growth could slow more sharply than forecast this year as higher inflation dents household spending and political uncertainty undermines sentiment. All eyes are on the Dutch and French elections and action from Briton after passing law, awaiting royal ascent, to commence official proceedings to exit the euro-zone.

The Australian economy diverged from other economies in the December quarter exhibiting signs of weaker growth from falling housing activity, falling government investment spending and weakness in net exports. However this is anticipated to have reversed with a rebound in growth supported by a significant improvement in real retail trade as well as an improvement in residential construction. While growth in household income remains low, the growth in GDP looks set to continue.

In the Reserve Bank of Australia (RBA) policy statement the central bank has been explicit in saying that any further rate cut is not in the national interests. The depreciation of the exchange rate has helped the economy transition from the mining investment boom and as such any rise in the exchange rate would complicate the adjustment. However, the commodity tail wind will probably soon run out of puff as China slows. A slowing China will also likely take the heat out of the Australian housing market. These factors will enable to the RBA to sit on its hands for much, if not all, of 2017.

With tightening labour market conditions and rising inflation in the US there is clear support for further interest rate hikes there. With high unemployment and low inflation in Australia there is little to force the RBA?s hand except perhaps if the Australian Dollar appreciates. As such the outlook for Australia remains supported by low interest rates as does much of the global economy.

Royston Capital is a privately owned and operated business. (AFSL: 438262 ABN: 98 158 028 392)
This information is of a general nature only and has been provided without taking account of your objectives, financial situation or needs. Because of this, you shouldconsiderwhethertheinformationisappropriateinlightofyourparticularobjectives,financialsituationandneeds. Norepresentationisgiven, warranty made or responsibility taken about the accuracy, timeliness or completeness of information sourced from third parties. Because of this, we recommend you consider, with or without the assistance of a financial adviser, whether the information is appropriate in light of your particular needs and circumstances.
Sources: Alexander Funds Management, Admiral Investments, Morningstar, Reserve Bank of Australia, Capital Economics.
Chart: Fixed Asset Investment by SoE?s has Surged – Narrow Road Capital
Past performance is not a reliable indicator of future performance. Projected earnings are not guaranteed.