“Steady, it was just a little turbulence”

The month of October saw many share markets around the world fall sharply, this was despite indications of continuing strength in global economic readings. Steady, it was just a little turbulence. Right? It seems that many market commentators are focused on what can go wrong, it certainly makes for a better headline. The US is likely to be the first major economy to raise rates to a neutral policy setting and potentially to contractionary policy setting. Add to this the trade war being waged by the US on China is adding further risk to growth in both economies, higher interest rates and debt problems in emerging economies and geopolitical issues. There are plenty of downside risks to the global economy but few if any have shown evidence of slowing the global economy, yet.

Royston Capital clients recently enjoyed the half yearly presentation from the Investment Committee. Three key slides came from this presentation are included below. 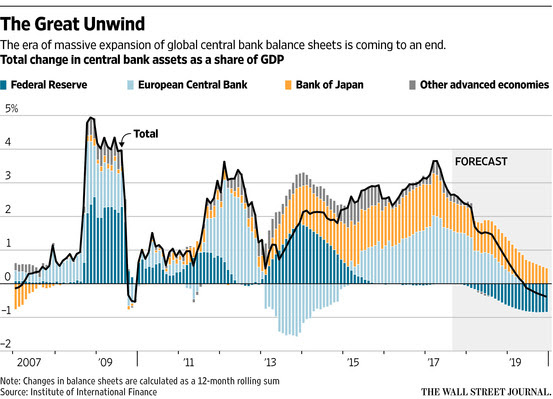 US economic reports released in October still bear witness to a strong economy at risk of over-heating and generating higher inflation. As the chart below shows, the Trump administration has been doing to opposite to Economics 101 and has been adding stimulus when the employment market is at capacity.

US consumers continue to lift their spending at close to 4% annualised pace. Factors supporting stronger consumer spending include low unemployment. Wages are growing faster than all measures of US annual inflation.

While the US Fed has kept rates on hold this month it is clear that they will increase rates as expected in December. It seems the US Fed is fast approaching a neutral setting for interest rates and the expectation is that this could quickly move to a contractionary policy setting. It’s not only the Fed policy action that is pushing up interest rates, as Ofer Karliner highlighted in the seminar, the reversal of its bond purchases is adding to the upward pressure, and this has only just begun. $320b of stimulus has been removed but as the chart below highlights it’s only the tip of the iceberg.

The ballooning bond issuing program of the US Treasury to fund the Trump Administration’s tax reduction and government spending initiatives are adding pressure as well. One saving grace is that inflation in the United States is still comparatively restrained.

Moving to China, growth has slipped from 6.7% to 6.5%. The trade war with the US is likely to be having an impact so the Chinese Authorities have been making some changes, particularly to encourage domestic consumer spending. The trade war is likely to continue for an extended period of time and seemingly the dual strategy of the trade war is to get concessions on US corporate intellectual property issues and to slow the Chinese economy thus reducing influence.

In Europe we are seeing the beginning of the end for one of the great politicians in Europe, Angela Merkel. She and her country, have been a mainstay for the European economy but the position of minority government seems to have bought forward her retirement. Only time will tell what impact this will have on the German and European economies and we can only hope their political system does fall to the dysfunctional state of the UK, Australia, US and others. For now the European Central Bank has left its key policy rates unchanged, but is still on track to end its bond purchasing program at the end of this year and starting lifting policy interest rates later next year. Europe’s economic outlook is challenging for the ECB with the US-China trade war and political tensions inside the European Union. At the same time growth in Europe is stretching capacity in several economies including Germany and pressure is building on inflation.

Economic indicators in Australia remained positive and unemployment fell to 5.0%. Despite this, our political leaders managed to create enough uncertainty with the Liberal Party losing the seat of Wentworth, now only in power with the support of cross-benches and wondering why the man they stabbed in the back wouldn’t help them!

“With the economy growing above trend, a further reduction in the unemployment rate is expected to around 4¾ per cent in 2020… Wages growth remains low, although it has picked up a little. The improvement in the economy should see some further lift in wages growth over time, although this is still expected to be a gradual process.”

Strong labour market conditions are encouraging the household sector to spend even in the face of weak housing and high household debt. We have seen the savings rate decline. This is despite a weakening housing market which will probably detract from GDP.

So yes, there has been a little bit of turbulence of the past month. A ‘market shake-out’ as we recently described it. Economic indicators are positive and pointing to stronger economic growth that is causing central banks to remove stimulus from their economies. This is not a bad thing, it is not contractionary. It is when good central bankers and good politicians are struggling to contain an economy that bubbles are created, for bubbles burst with a bang….not whimper. For now, inflation is contained and we are staring to enjoy a modest and slow paced up-swing which if managed well could see the avoidance of asset bubbles and other problems.

© 2018 Royston Capital Pty Ltd.  All rights reserved.  No part of this publication may be reproduced by any means, whether graphically, electronically, mechanically or otherwise howsoever, including without limitation photocopying and recording on magnetic tape, or included in any information store and/or retrieval system without prior written permission of Royston Capital Pty Ltd.