The global economy has continued to improve and influence financial market performance through September. and early October. Labour markets have tightened and above trend growth is expected in a number of economies, although uncertainties remain such as the geopolitical tensions epitomised by rouge nation North Korea. Growth in China is being supported by increased spending on infrastructure and property construction, with high levels of debt continuing to present a medium-term risk. Investors actively sought out opportunities outside of the US, yet US markets still reached records highs. Japan?s Nikkei and Germany?s DAX were standout performers rising 3.6% and 6.4% respectively. Britain?s FTSE was lower with uncertainties around Brexit weighing on sentiment and Australian ASX200 was down 0.6% as doubts crept in over China?s appetite for our commodities, the AUD$ continued to levitate and political policy vacuum restrains growth.

As wage growth around the world remains low, so does inflation. The US Federal Reserve has indicated that it is likely to raise rates by 25bpts in December along with its staged monthly selling program of its holdings of government bonds and mortgage backed securities. US financial markets were impacted by the developing crisis with North Korea and several severe weather events. The dysfunctional Trump administration could be starting to find its way if only it can navigate debt ceiling negotiations and revitalise its tax reform agenda. GDP showed above trend growth of 3.1% with strong contributions from consumer spending and business investment. Inflation however remains low but pressures are mounting. Rate increases are forecast throughout 2018 as the FED moves to normalise interest rates, eventually, rising interest rates will cause the long bull market in risk assets to end.

It?s an important month for China with the national congress for the Communist Party occurring this month where President Xi is widely expected to consolidate his power. Economic readings show continued support for GDP readings in the order of 6.5% to 6.9% with growth slowing due to economic reform on housing investment and high polluting industries. China is also facing diplomatic pressure to play a greater role in influencing North Korea…..potentially towards a regime change….contrary to its interests. China?s international trade is likely to suffer from a prolonged impasse on the matter.

Europe has outperformed expectations. The global economic recovery has helped lift demand and there are signs that internal demand is also lifting. Household spending has been strong assisted by a falling unemployment rate. This is complemented with consumer sentiment now being the strongest in over a decade. Business investment has increased although uncertainties remain with GDP remaining stuck at circa 2% year on year. The European Central Bank (ECB) is well placed to retain its accommodative monetary policy settings but may well need to accelerate the retirement of Quantative Easing asset purchases and lift interest rates should the current trends continue.

Political uncertainty and the policy vacuum also continues to pose a risk to Australia?s economic fortunes. We are in fact on the way to a record 26 years without a recession which will soon surpass the Netherlands record. However, Australia?s success has been underpinned not buy good economic policy and economic reform but by immigration and basic resource exports feeding Asia?s giant economy?s.

The reliance on rapid immigration has underpinned the housing construction boom and put pressure on our infrastructure. As economies around the world show signs of sustainable growth Australia has faltered. Political dysfunction has led to a policy vacuum around energy that has seen electricity prices surge to among the highest in the world despite Australia holding some the largest coal and gas reserves. Household debt is now at a record high of 194% of income, compared to 104% in the US. Still, it could be worse, we could have high unemployment as we did in the early 1990?s. Essentially, our growth has been flattered by immigration and when viewed on a per capita basis it losses plenty of gloss. 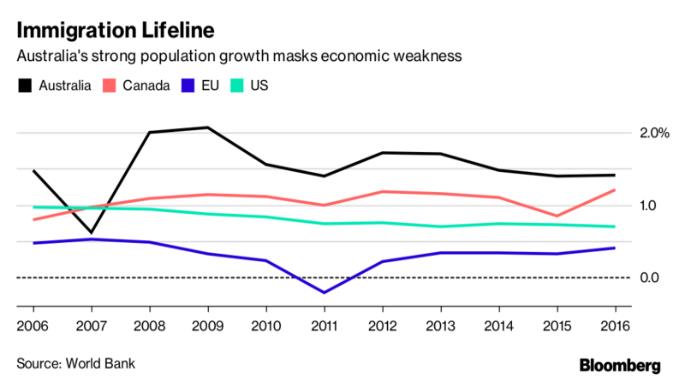 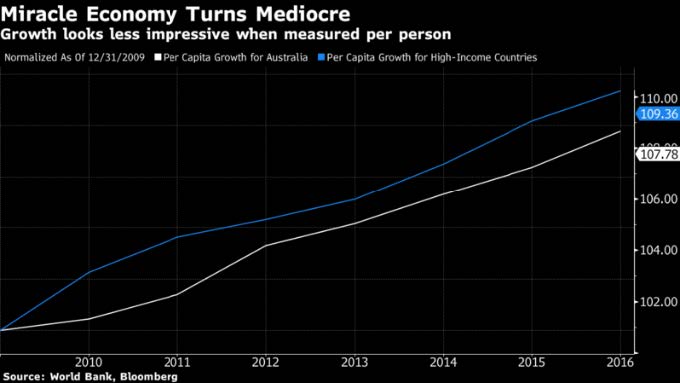 Over recent months there have been more consistent signs that non-mining business investment is picking up. GDP growth improved to 1.8% year on year and should continue to lift, although the pathway appears bumpy. Household spending lifted although this was from savings not wages growth and as such has limited life in it given the exceptionally high level of indebtedness. APRA has been working hard to curb issues in the housing investment sector and this seems to be working. It could be expected that housing activity could be a drag on GDP growth over the course of the next year or so. However, business spending could turning more positive. Strong employment growth could support increased household spending and wages growth. The trend of stronger global growth should benefit Australian exports if the AUD$ can be kept under control however China?s evolving economy could cause a few bumps along the way.

A large pipeline of infrastructure spending that will dwarf the previous spending on the mining boom supports a positive outlook for the Australian economy. The current trend for slow wages growth and high levels of household debt that have been constraining the economy and consumer spending can all turn for the positive. The RBA has retained a low official cash rate as expected this month to continue to support the economy and retaining downward pressure on the AUD$. The risk of a rate rise in November is diminishing with rate rises now likely to occur in early 2018 driven by global growth. The policy vacuum may be diminishing but positive policy impact will take time to filter through to the economy.

Royston Capital is a privately owned and operated business. (AFSL: 438262 ABN: 98 158 028 392)
This information is of a general nature only and has been provided without taking account of your objectives, financial situation or needs. Because of this, you shouldconsiderwhethertheinformationisappropriateinlightofyourparticularobjectives,financialsituationandneeds. Norepresentationisgiven, warranty made or responsibility taken about the accuracy, timeliness or completeness of information sourced from third partie s. Because of this, we recommend you consider, with or without the assistance of a financial adviser, whether the information is appropriate in ligh t of your particular needs and circumstances.
Sources: Alexander Funds Management, Admiral Investments, Morningstar, Reserve Bank of Australia, https://www.bloomberg.com/news/articles/2017-10-02/miracle-economy-turns-mediocre-as-policy-drift-drags-australia
Past performance is not a reliable indicator of future performance. Projected earnings are not guaranteed.