Global economic activity continues to improve all-be-it with mixed strength in August. Unemployment rates in many countries continue to fall, in some countries to levels that have in the past been consistent with rising wages and inflation. Inflation remains low frustrating many central banks. Central banks are caught between a desire to remove easy monetary conditions and persistently low inflation. So long as global economic growth continues to gather pace, central banks are likely to gradually shift from easy monetary policy settings and hike official interest rates. Evidence thus far is the US who have hiked once and are talking about the next along with balance sheet adjustment, ECB commencing the unwind of its bond purchases and Australia shifting language that indicates the next move is up. A key risk to the global economy is that of the rising tension between the US and North Korea. As Gideon Rachman of the Financial Times said in his AFR article, Miscalculation could lead to a Korean war, 5 Sept 2017 ?These risks would be difficult to manage even with rational, experienced leaders in power. But the key decision makers are a 71- year-old businessman with a volcanic temper and no relevant experience, and a 33-year-old dictator, surrounded by frightened sycophants.?

In the US, August economic readings were firm, with Q3 GDP continuing its good form to come in close to 2.5% pa and last quarters GDP likely to be revised higher. US household consumption appears robust, supported by strong employment growth ? Nonfarm payrolls up by more than 200,000 in June and July, reasonable wages growth, elevated consumer sentiment and growth in household wealth. One soft spot in July was housing activity. Housing starts fell 4.8% month on month, housing permits were down by 4.1%, new home sales fell 9.4% and existing home sales fell by 1.3%, however more recent data indicated mortgage application rose 3.3% last week. Housing numbers can be erratic so we will wait for a trend to emerge, while the Texan hurricane may also have an impact.

Despite the dysfunctional Trump administration, the US economy continues to perform well. The economy is close to full capacity and this will eventually prime inflation. This will vindicate rate rises and reductions in the Fed?s balance sheet. A tangible threat to this is a prolonged shut down of government services should there be an impasse between the President and Congress.

China has also demonstrated strong GDP of 6.9% in Q2, miraculously matching its annual growth in Q1. There are however signs of slippage in Q3 as indicators of economic activity released in July were almost all softer. The slowdown appears consistent with policy efforts to curb excessive credit growth and too much investment in residential property construction.

Europe continues to improve with the stronger GDP growth generating employment growth and a falling unemployment rate. Inflation is lifting but will need to rise substantially more before the ECB will act by increasing rates. The ECB is however likely to reduce its monthly bond purchases.

Australia is stuck in an economic disconnect. Business is regaining its strut and has begun investing, but debt-laden households are struggling with stagnant incomes and substantial hikes in power prices.

Governor Philip Lowe summed up the predicament during testimony to lawmakers last month, noting wage growth in Australia has slowed more than productivity growth: ?The consequence of that is that the share of national income that is going to capital is at a five-decade high and the share going to labor is at a five-decade low.?

Business conditions are at the highest level since before the 2008 financial crisis and that?s helped drive a sustained lift in firms? confidence. But consumer sentiment has gone in the opposite direction, with August marking the ninth month when pessimists outnumbered optimists, the weakest succession of reads since 2008. It?s no wonder with household debt levels extremely high and wages growth very weak.

The RBA left rates on hold this month which should?have surprised no one. The next move will be up. A?strengthening economy could encourage the?household sector to increase borrowings. However?this presents a potentially unacceptable risk to the economy and financial stability. It is this that will lead the RBA to raise the official cash rate before anyone anticipates. It is for this reason that we feel there is a risk of a rate rise in November but more probable move in early 2018. 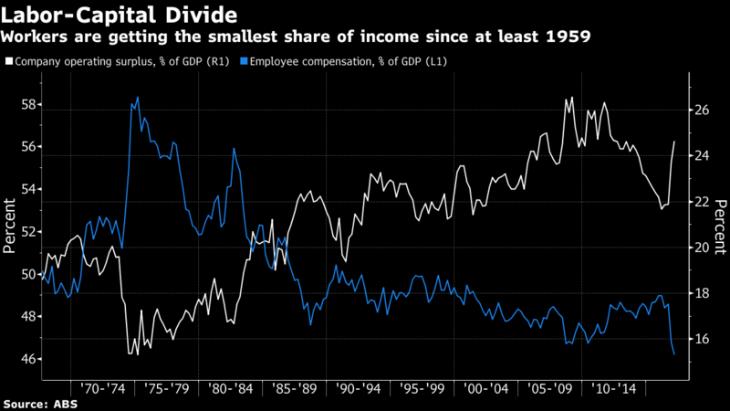 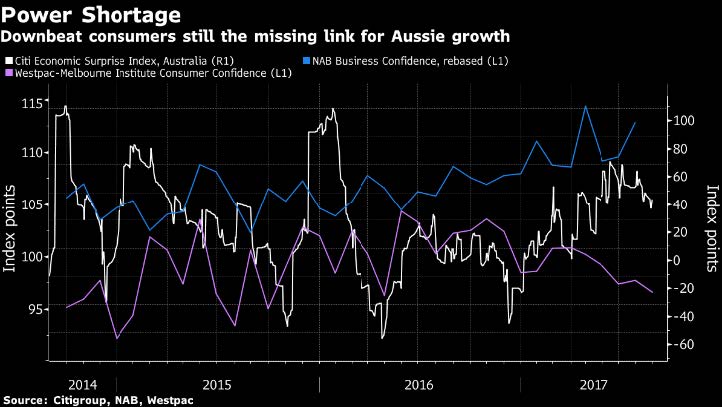 Royston Capital is a privately owned and operated business. (AFSL: 438262 ABN: 98 158 028 392)
This information is of a general nature only and has been provided without taking account of your objectives, financial situation or needs. Because of this, you should consider whether the information is appropriate in light of your particular objectives, financial situation and needs. No representation is given, warranty made or responsibility taken about the accuracy, timeliness or completeness of information sourced from third partie s. Because of this, we recommend you consider, with or without the assistance of a financial adviser, whether the information is appropriate in light of your particular needs and circumstances.
Sources: Alexander Funds Management, Admiral Investments, Morningstar, Reserve Bank of Australia, CommSec, http://www.afr.com/news/politics/world/miscalculation-could-lead-to-a-korean-war-20170904-gyat67
Past performance is not a reliable indicator of future performance. Projected earnings are not guaranteed.